-Now That's What I Call POM!
A compilation album meant to present the best POM2 music of its first five years of existence!

-Everybody's A Hero
Compilation album from Poetic's contest of the same name which includes songs from Fenderbender, Plug and Play, LotWPro, Chester, TraceofHatred and more

-Ghosts of a Memory
Collaboration album between MuFFiNz and DecyferIt

-Blue Harvest Vol. 2: Desired Renaissance
The same crew from Vol. 1 are back again with yet another collection of exceptional work.

NOW THAT'S WHAT I CALL POM!

BATTLE OF THE BAND - VOLUME 2

BATTLE OF THE BAND - VOLUME 1

GHOSTS OF A MEMORY 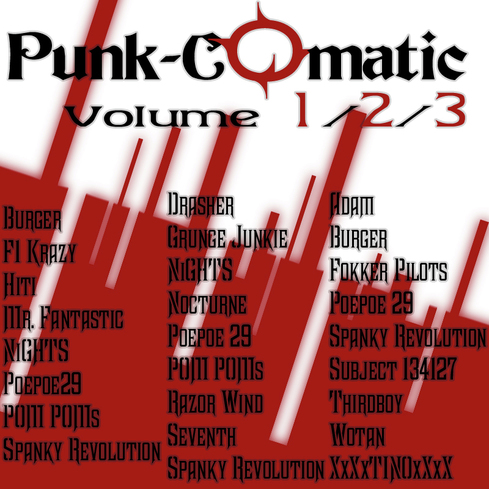 Click to download // Covers by jod.drummer
After a long contest held on the punk-o-matic.net's forums by Spanky Revolution, itself, Burger and Seventh noted every single submission, Hiti, Nocturne and Fokker Pilots won the 1st prize in their category. On this compilation, you can listen to the very best of what has been submitted. The album is divided in three volumes, one punk, one rock and one hard rock and metal. There are one song from every artist plus tons of others that made us proud of the community. The album also includes songs from the judges. The album includes one cover for every album as well as a main cover.