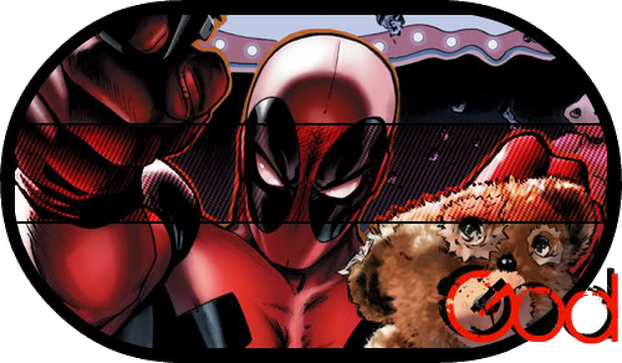 -Or Forever Hold Your Peace
-Through the Mirror and to the Other Side
-God and Friends...

...OR FOREVER HOLD YOU PEACE

THROUGH THE MIRROR AND TO THE OTHER SIDE

Every great POM artist has their beginning. Suffice it to say that not all great POM artists have a up to par debut. In the case of God who, as we all know, has a knack for creating albums that garner perfect ten attention(no...literally), God and Friends sounds like something that belongs in the junior effort or the last hurrah from an artist who has spent all the wax on his creative candle.

Opener, The Crusaders, begins with a slow and fuzzed P section that drifts away into a melodic A section that really puts me back to the time when I was first hearing Rofl Monster's now legendary debut album. The first word that comes to mind when describing this song is, "FANFARE". If you can find another word that fits, fine, but I'm sticking with Fanfare because like the word, this song is badass. Around 2:20 a solo comes soaring in from the skies over the mythical realm of Pleasurable Audio....a place that I think God vacations in regularly.

As you plow through each track you're going to eventually come to this conclusion: God really knows how to utilize the P's. In mostly every song there is this slab of melodic power chords welcoming or at least, caressing your ear drums. Mine were tickled so hard they giggled.

Following suite, you are approached by Victory Screech. Instantly you are greeted with a light gust of P's which quickly fades into a melodic section of A's which, depending on what mood the listener is in, will remind you of flying through the air....just like God does before he strikes down a group of Westboro Baptist protestors. And like that act of vengeance, this song carries about the same ferocity and speed. The drums are pretty insane, good, but not worth a real mention. They stick to a basic "Good Cop/Bad Cop" formula. I'm not complaining, just giving a general statement.

The mood for God and Friends is decidely positive. The slabs of heaviness don't really overtake the prominent fanfare-esque leads and solos raging around this album like a senile mental patient on a segway. At times however, you may find yourselves hearing some basic riffs heard in the first few songs, which while perfectly understandable, could be suspected of being intentional. This, however, does not speak for any of the solos or intros. Those are all carefully/semi-carefully created and you can tell that some sort of conscious, albeit not completely conscious, thought went into each songs specific, real important, details.

Ballad of the Manticore, the shortest song on the album, breaks the mood with some nostalgic POM 1 riffage. Only this time there is actually bass and it rocks, too. This could have seriously passed for a bonus POM 1 track that went through Fruity Loops or something. Great song. Once you hear it you will feel like you were back in the POM 1 quick chat; it's just great to hear something like that again.

At the end of the road there is Ghidorah. Not sure what movie or video game that came off, but this song is a "no effing around" thrash metal song. The bass fx intro that seques into a seriously badass guitar fx intro remind me a lot of Slayer riffage and unlike anything else I have ever heard on POM. This meat ain't even tender cut. It's rough and scary like. Definitely not for the faint of heart. It's like Mr. Universe picking up a neutron star- sized portion of steak and slapping you dead in the face with it. To get your heart racing some, the three minute mark throws in some random lead build. If you haven't had an anxiety attack by now and are still conscious, you understand what I'm saying.

My last and final point will be the use of FX on this album. God has definitely paved the way with his use of it. All aspiring POM metal composers/imposters take note, this is how FX in metal is used; PROPERLY.

With all this in mind, God has created a metal/hard rock masterpiece. Juggling raw emotion, creative hooks, catchy solos, and innovation of not commonly used elements can be hard for OTHER people, but for God it's just another day of dropping audio bombs on the minds of others. This crater maker gets a.........

God has been on the site since the stone age and has been in a moderating position since early 2009. Serving two years as a moderator and a short time as an admin, God has seen it all. And now that he is honing his craft with his music, he plans to take Punk-O-Matic to a new level.

Nobody knows where God comes from but a select few people from the Book of Face. Many people believe he is actually the Good Lord himself. Others think he's just a wannabe kid from New Jersey that plays bass and doesn't care about religion. Talk about stupid, blasphemous thoughts!

He also enjoy candlelight dinners and longs walks on the beach. He also likes partaking in the occasional mailbox smashing or spontaneously combusting. He also likes Resident Evil. A lot. You can hear him at night sometimes screaming obscenities at Sheva if it's quiet enough.

God will continue making music until the day he dies. POM is what keeps him occupied and has him making more over the top music. He keeps looking to find ways to make his music better and the most elite of the bunch. Get on his level, n00bs.

God is also going to stop talking in third person from now on.