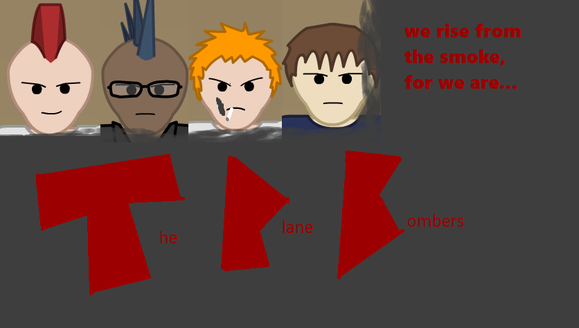 At the end of the summer, 14 year old Caleb, as well as 3 other friends named Justin, Mikey, and and Danny, They started righting music together, it was first Metal but Caleb brought home a Sex pistols record and they loved it, Caleb has always been a fan of Punk rock and they desided to start a Punk band together, they wern't sure on what to call it, some names where "Left behind", "Dirty Needles" "The Chalkeaters" "The Planes". they desided on the name "The Plane Bombers". however, shortly into the bands life, Justin was kicked out for having a really zwiz and all in all, shitty attitude while he was their. they replaced him With a 15 year old kid named Alex. The band started recording on a really old recording system. They wanted to go and press some copies, but they didn't have money. they then turned to POM records, which they were immediately turned around AGAIN because POM records were no more anymore. They then Turned to Cookie and biscuit records. When they where greeted by the owner who wanted to press the Demo and turn it into a EP. they said yes, but all the while making a little mini record of their own, just for fun!

Caleb: age 15,(Red mohawk) Is the most energetic of them all, loved by both his mother and father only his father was kicked out because his father was an acoholic. loves punk rock, skateboarding but hates people. *funny because to be in a band, you gotta be with people, and play to people*

Danny: age 15. (Black guy) The most mellow and the biggest stoner in the group, his father and mother loved him very much, however the kids at school never did because of his personality and was teased about his voice *his voice is very high, and cant pronounce some words correctly*. Loves punk rock *especially loves GG allin* weed, and longboarding

Alex: age 14.(Brown hair, has asian backgrounds) The best bassist The bombers ever had *though they've only had 2 so far* Not much is known except for the fact he comes from a broken home and was living on the streets for 5 years as a kid, until he got brought into an orphanage. sick and tired of the kids their, he ran away and met Caleb, Danny, and mikey, who were looking for a bass player. never playing bass before but eager, accepted the offer to join up. a quick learner, soon got good at bass

Mikey: Age 16. (Orange hair) He too came from a broken home, except his was worse, he was beaten, sexually molested. and the reason he always has an angry expression is because of his childhood, hes angry at his parents who treated him like a whipping boy and nothing else! He doesn't love alot except for Spongebob, and Punk rock *The entire band loves Nickelodeon by the way*

This band is energetic, they're loud, raw, and fast as all hell! so you better watch the f*ck up or you'll be blasted away by a wall of awesomeness biatch!